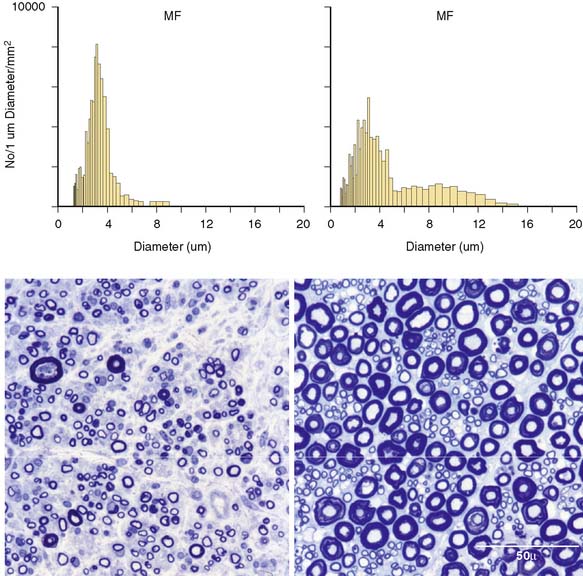 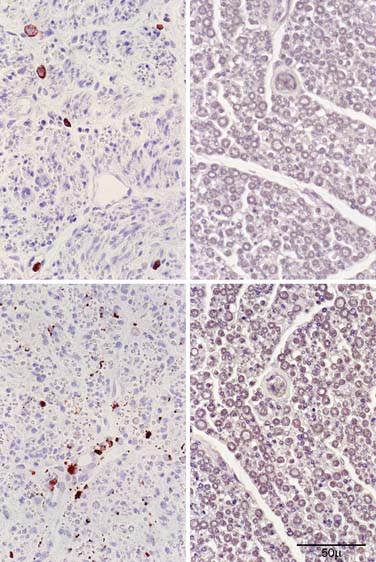 Figure 6-3 Transverse paraffin sections from a lumbar dorsal rootlet of the patient with chronic immune sensory polyradiculopathy (CISP) reacted to leukocyte common antigen (CD45, upper panel) and to a macrophage antigen (CD68, lower panel). The patient’s sections are on the left; sections from an age-matched postmortem control are on the right. There are scattered lymphocytes seen in the patient’s biopsy but not in the control. There are scattered macrophages in the endoneurium often adjacent to nerve fibers with onion bulbs. We interpret the common association of macrophages and onion bulbs as suggestive of immune demyelination. 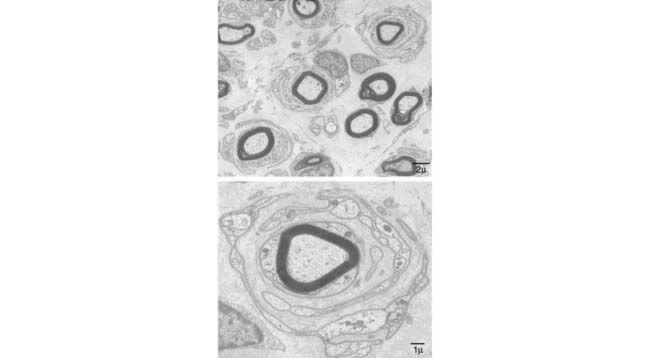 Involvement of nerve roots is common in varieties of both acute and chronic (CIDP) inflammatory demyelinating polyradiculoneuropathies, but generally the distal nerve is also affected by these diseases. Isolated inflammatory or immune involvement affecting the sensory roots proximal to the DRG has been hypothesized in isolated cases, but there has not been pathologic confirmation.1

The differential diagnosis for proximal sensory neuropathies is large. Patients with the Miller Fisher syndrome present with sensory ataxia and areflexia but differ from our patient in that their illness is acute and monophasic, and usually accompanied by cranial nerve involvement.3 The sensory neuropathy of Sjögren’s syndrome characteristically affects the DRG, and therefore, isolated involvement of the adjacent sensory root is an appealing hypothesis. However, our patient did have negative extractable nuclear antigen antibodies, sicca symptoms were absent, and the pathologic findings did not suggest a microvasculitis (as is typically seen in patients with Sjögren’s neuropathy).4 In tabes dorsalis, the disease locus is thought to involve the dorsal root entry zone, but our patient did not have a positive syphilis serology or chronic meningitis. The chronic ataxia seen in our patient would be in keeping with spinocerebellar ataxia, but the lack of cerebellar abnormalities on examination and imaging, and the improvement with immunotherapy would not. The possibility of a central nervous system demyelinating disease causing selective involvement of adjacent fiber tracts is unlikely. This possibility is even further diminished because no associated signal abnormalities on MRI of brain and spinal cord were found and typical CSF abnormalities of multiple sclerosis were not seen.

The histologic findings described here are those of chronic immune demyelination and are similar to changes observed in the peripheral nerves of patients with CIDP. The presence of endoneurial macrophages in the absence of degenerating profiles usually associated with secondary macrophage infiltration, argues for a primary demyelinating event.