Several pathologic processes associated with brain tumors may result in loss of neuronal function. If the neurological dysfunction is acute and/or the progression of neurological signs and symptoms is rapid, this constellation of findings may be defined as a neurological emergency. The difficulty in management of neurological emergencies, often with a satisfactory outcome, is the sensitivity of the neurons from a lack of oxygen and/or glucose, resulting in neuronal death within a short period of time.

A key basic concept must be initially addressed, that is, prevention of expansion of the intracranial contents, which are contained in a nonexpansile closed box. This latter consists of the dura matter and skull, as well as contents of the spinal canal surrounded by the vertebral bony ring. Five decades ago most neurosurgical procedures addressed decompression of these structures irrespective of the etiology.

Subsequently, with the development of the specialty, it has become evident several etiologies result in neurological emergencies. These include mechanical distortion of the neural structures, alteration in blood supply, pituitary apoplexy, development of secondary injury, toxic substances interfering with cell metabolism, and others.

Identifying these pathological processes by improved diagnostic techniques and more effectively treating such pathologic entities has been the goal over the past five decades in neurological surgery. This has resulted in use of steroids and hypertonic solutions to treat cerebral edema, control of cerebral perfusion pressure by measurement of systemic blood pressure and intracranial pressure (ICP), use of barbiturates, hypocarphia, vasoconstrictors, and vasodilators, to name a few.

As the number of variables increases, the problem of treating neurological emergencies becomes more complex and the treatment of neurosurgical emergency criteria is altered. Nevertheless, the basic tenets remain, i.e., the inability of the central nervous system to produce new neurons or to repair neurons except in the most rudimentary manner through disrupted neural processes.

The Monro-Kellie doctrine describes the relationship of pressure and volumes in a closed nondistensible container. The contents of the intracranial space are the summation of brain tissue, blood, and cerebrospinal fluid (CSF). Subsequent to fusion of the interosseous sutures, if one of these components increases, one or more of the other constants must decrease to maintain the ICP in physiologic range. If these compensatory mechanisms are no longer functional, pathological increases in ICP occur. These changes were first described and qualified by Lundberg.1

Langfitt subsequently expanded on these ICP observations, using an expanding balloon in the experimental monkey model.2–4 When the epidural or intraparenchymal mass was small, transient and incomplete elevation of ICP occurred. With further increase in the mass volume, sustained irreversible ICP elevation was identified throughout the subarachnoid space.

Central nervous system tissues have the characteristics of a liquid-solid consistency, and prolonged elevation of ICP results in transtentorial and cerebellar tonsillar herniation. These syndromes are associated with a high mortality and morbidity if not rapidly recognized and effectively treated.

Abrupt neurologic deterioration may result from several etiologies associated with brain tumors, resulting in increased ICP. These include intracranial hemorrhage, infarction, cerebral edema, hydrocephalus, tissue necrosis, pituitary apoplexy, and seizures. These entities may occur singularly or in combination and the symptoms usually reflect the rapidity of the pathologic onset. Some entities such as convulsions may or may not be associated with increased ICP.

One of the most frequent mechanisms of sudden neurological deterioration is hemorrhage. The incidence of brain tumor-related intracranial hemorrhage, resulting in acute neurological symptoms, is between 2.5% and 29%.5–8 Although many intracranial tumors occasionally hemorrhage, choriocarcinoma, renal cell carcinoma, malignant melanoma, and glioblastoma multiforme do so with the highest frequency (Fig. 12-1). 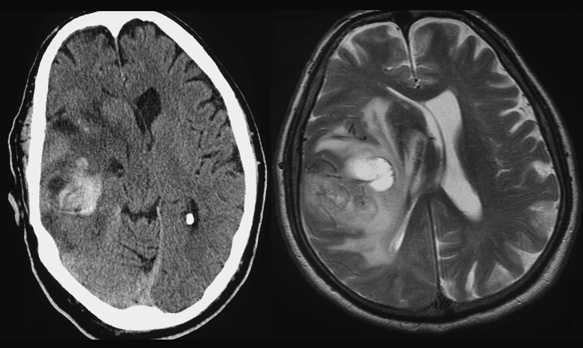 Coagulopathy secondary to thrombocytopenia or disseminated intravascular coagulopathy is the most common etiology of intracranial hemorrhage associated with metastatic brain tumors.7 Additional etiologies include neoplastic invasion of normal cerebral vessels, central necrosis, lentiform capillaries formed by revascularization, and previous external beam radiation therapy to the tumor. Asymptomatic intraparenchymal hemorrhage is found in 4% to 5% of patients at autopsy.7

Intracranial hemorrhage may be located within the tumor, brain parenchyma, subarachnoid or subdural spaces, in decreasing order of frequency. Tumors should be suspected in patients with intracranial hemorrhage who have a previous diagnosis of cancer, but with no other cerebrovascular risk factors in a location exclusive of the basal ganglia.

Small paraventricular hematomas strategically located adjacent to the foramen of Monro or aqueduct of Sylvius may obstruct the normal outflow of CSF pathways and cause obstructive hydrocephalus. Larger hemorrhages into the third and fourth ventricle may also obstruct CSF egress from the ventricular system. Hemorrhage into the subarachnoid space may result in communicating hydrocephalus secondary to obstruction of CSF absorptive pathways.

An unusual etiology resulting in acute neurological deterioration is infarction of the surrounding brain parenchyma associated with brain tumors. The infarction occurs secondary to compression or necrosis of intracranial blood vessels or intravascular embolization by the tumor. These mechanisms may involve either the arterial or venous vasculature, although the latter is less common than the former.

Degeneration within the tumor or brain parenchyma results in cystic degeneration. These cystic changes may enlarge secondary to repeated infarction, hemorrhage into the cyst, active secretion, and/or osmotic transfer of protein-rich material into the cystic cavity. Enlargement of these cysts may result in substantial shift of the intracranial contents, with resulting brain herniation.

Two types of brain edema are associated with intracranial neoplasms: cytotoxic and vasogenic. These types usually occur in combination rather than separately. The incidence and extent of cerebral edema is usually proportional to the biological aggressiveness of the tumor.

Cytotoxic edema is found mainly after cerebral ischemia, trauma, intoxications, and metabolic disorders. Pathogenic mechanisms include failure of sodium export via Na+ ATP-pase because of energy shortage, increased Na+ permeability, or activation of Na+-driven pumps. The intracellular volume is increased and interstitial volume is decreased. Gray matter is more involved than white matter.9

Vasogenic edema is caused by damage to the blood-brain barrier and consists of protein-rich fluid. This extracellular edema is accompanied by brain tumors, trauma, infection, and hypertensive crises. Pathogenic mechanisms include breakdown of tight junctions by cytokines such as leukotrines and occur at the capillary level. A second etiology of vasogenic edema is sprouting of immature blood vessels associated with brain tumors. These neovascularized rentiform capillaries have no tight junctions and edema occurs primarily in the brain white matter.

A third type of edema, interstitial, is associated with hydrocephalus. It is usually chronic, and the volume of the interstitial space is expanded by increased hydrostatic pressure. Interstitial edema is located in the periventricular white matter; intracellular volume is not increased and is often reduced. 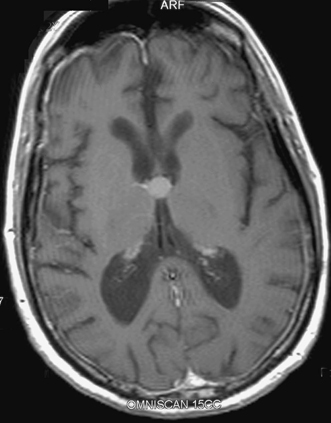 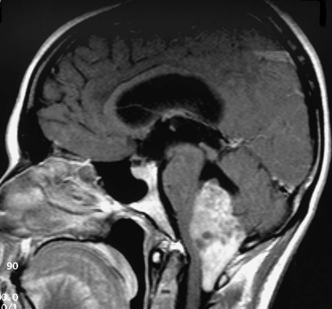 Noncommunicating hydrocephalus may be secondary to tumors located where there is obstruction of the CSF outflow pathways, such as the foramen of Monro or the aqueduct of Sylvius (Fig. 12-2). Larger hemispheric and posterior fossa tumors may result in hydrocephalus by shift of the ventricular system by mass effect. Intraventricular tumors may also obstruct the CSF outflow system (Fig. 12-3 and Fig. 12-4).

Communicating hydrocephalus is usually associated with leptomeningeal metastasis from tumors such as medulloblastoma, gliomas, or metastatic melanoma and is associated with impaired CSF resorption. This entity may also result from tumors that oversecrete CSF, such as choroid plexus papillomas (Fig. 12-5). 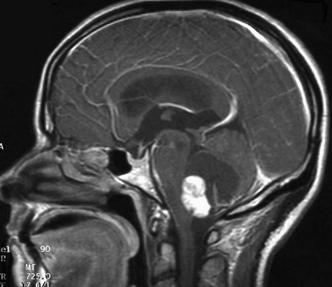 Figure 12-4 Sagittal magnetic resonance image with contrast to illustrate mural nodule in a cystic hemangioblastoma of the cerebellum. There is associated obstructive hydrocephalus.

Pituitary apoplexy is associated with hemorrhage into the intrasellar tumor of the pituitary gland10 (Fig. 12-6). Pituitary infarction and/or subsequent hemorrhage occur in the main from the mass compressing the hypophyseal arteries against the edges of the diaphragm sella. Symptoms may result from obstructive hydrocephalus, cranial nerve compression, renal insufficiency, or hemorrhage into the hypothalamus.

The signs and symptoms of pituitary apoplexy are usually abrupt onset of headache, ophthalmoplegia, visual disturbances, and changes in mental status. Obstructive hydrocephalus may develop secondary to suprasellar extension of the mass with obstruction of the third ventricle. Less frequently, obstructive hydrocephalus develops secondary to hemorrhage into the third ventricle.

Adrenal insufficiency is typically manifested by a gradual but progressive decrease in the level of consciousness (Addisonian crisis). This is associated with hypotension, tachycardia, absence of focal neurological deficit, and electrolyte abnormalities. This latter is usually manifested by hyponatremia. 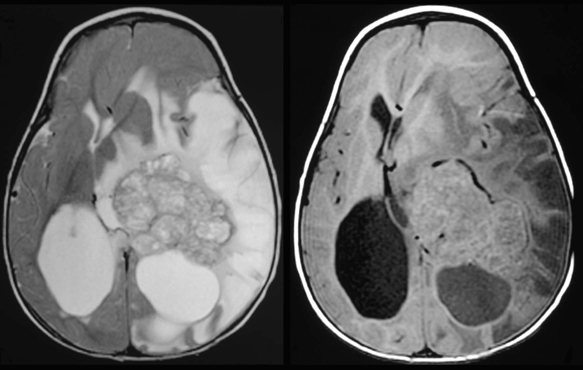