This OCT scan is poorly focused, as illustrated by the blurred cSLO image to the left. This scan was QC rejected according to the [O] criterion for this reason alone, but also conflicts with the [C] and [S] criteria.

For the second of the OSCAR-IB criteria, signal strength (S), we had arbitrarily chosen a cut-off of 15 dB [13] based on our experience and published evidence suggesting that poor signal strength decreases the signal-to-noise ratio of RNFL measures (Figure 18.2) [14, 8]. However, scans with poor signal strength (defined as < 15 dB for the Heidelberg Spectralis and < 10 dB for the Cirrus) but relatively good contrast between layers allowing for proper image post-processing and segmentation do exist. In absence of a transparent way to judge signal strength other than dB, we recommend to aim for a signal of at least 15 dB for the Heidelberg Spectralis and 10 dB for the Cirrus (the cut-off may be different for different devices entering the ever-increasing OCT market), but allow for a reasonable margin of judgment in OCT scans that give a good inter-layer contrast despite a lower signal strength. In order words, the S-criterion should be used as a soft criterion. 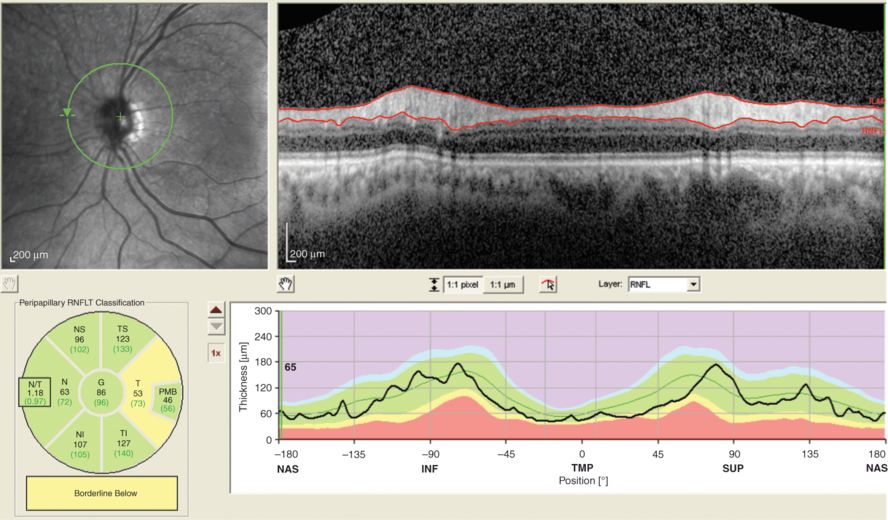 
The poor signal strength in this image (5 dB) causes a grainy and very noisy image. In addition, the (C, B) criteria are violated. The contrast levels between retinal layers are so poor that image post-processing will become questionable. This scan was QC rejected.

The third of the OSCAR-IB criteria, correct centration of the ring scan (C), is a hard criterion (Figure 18.3). Even a small degree of displacement between peripapillary ring scans can lead to a measurement artifact above 3.4 μm [5]. It should be highlighted that any change of position between a baseline and follow-up scan should be rejected for this reason. Likewise, any large level of imperfect centering at baseline, which in the worst-case scenario may cut through the optic nerve head itself, should be rejected (Figure 18.4). To judge what a “large displacement” means, we proposed to use the Royal Air Force (RAF) logo as a guide and reject peripapillary ring scans that cross two of the RAF logo rings [13]. What might be permissible is a slight displacement that is taken into consideration at follow-up scans by means of scan registration. Having some flexibility here is relevant because of the variable anatomy of the optic nerve head. 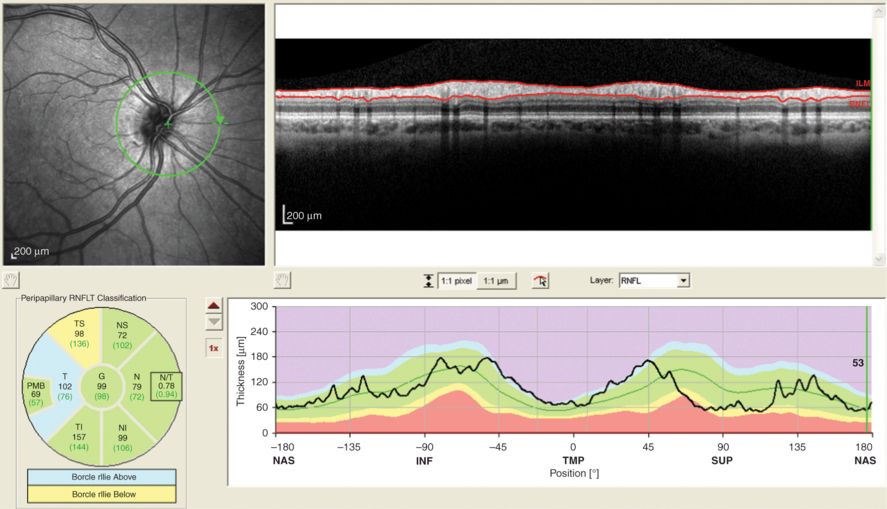 
Poor centering of the peripapillary ring scan. The cSLO image to the left shows that the green circle is not placed centrally over the optic nerve head, but is shifted to the right. As a result, the thickness profile of the temporal quadrant (T, TMP, −45–45 degree position) appears to be artificially thickened. This scan was QC rejected.


Another example of a poorly centered OCT technician ring scan submitted to a reading center in a multi-center setting. In this example, the nasal quadrant cuts through the cup of the optic disc. This scan was QC rejected.

The fourth of the OSCAR-IB criteria, algorithm failures (A), also present a serious issue. Any localized algorithm failure invalidates data taken from the respective retinal region. Such scans will need to be rejected. Importantly, this can be corrected by the reading center and in contrast to the other criteria re-assessment of a patient may not be needed.

In selected cases, it may be possible to correct such errors by image post-processing techniques, including manual correction. This procedure is extremely time-consuming. A decision may be made on individual scans. While this criterion should be handled rather strictly on the baseline scan in order to ensure optimal settings for longitudinal studies, one may accept that a minor, manually correctable algorithm failure on a valuable follow-up scan should not necessarily lead to immediate rejection. An OCT technician should be aware of this fact, because manual correction of algorithm failures may be possible prior to uploading a scan to a reading center.

The fifth of the OSCAR-IB criteria, retinal pathology (R), unrelated to MS can independently influence RNFL measures (see Figure 18.5) and ought to be taken into account in studies focused on MS. A list of pathologies to be considered is presented in Table 18.2. 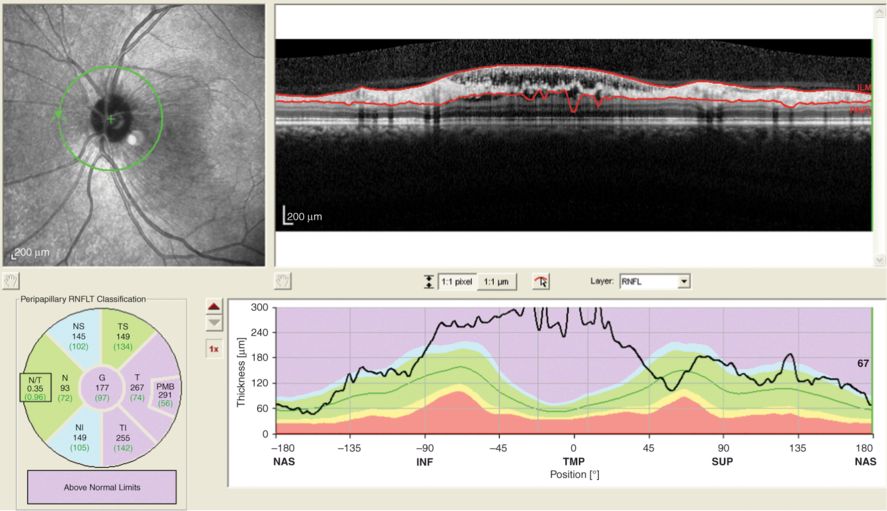 
In this patient central serous edema extends to the area captured by the peripapillary ring scan. Consequently the temporal quadrant of the RNFL appears to be thickened artificially. This scan was QC rejected.

Table 18.2 Pathology of the retina to be considered by the OSCAR-IB criteria. Table reproduced with permission from reference [13].

At present, a number of recent OCT studies have provided evidence that retinal pathology other than RNFL thinning exists in MS [11, 6, 10, 3], including microcystic macular edema (MME) predominantly affecting the inner nuclear layer (INL) of the retina. We, therefore, do not recommend rejecting OCT scans showing evidence of MME because this may be a clinically relevant finding in the disease. 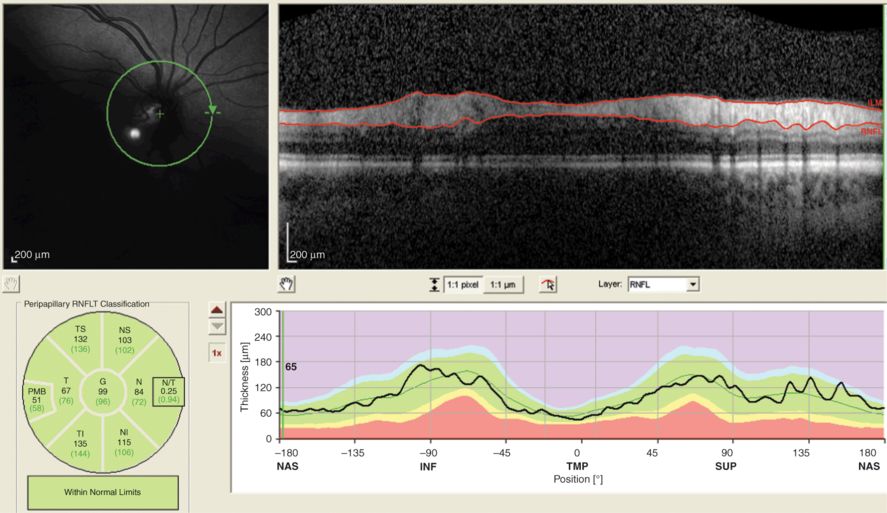 
A poorly illuminated OCT scan, which also causes a low signal such that it is impossible to recognize any of the retinal layers but the RNFL in the temporal quadrant. The (B) criterion is also violated. This scan was QC rejected.

What remains difficult is how to judge poor illumination in isolation. To give one example, Figure 18.7 shows a shadow cast on the retina by a floater. Should this scan be rejected? We would not do so because the scan quality is such that all retinal layers can clearly be distinguished and the scan would not fail because of any of the other OSCAR-IB criteria. 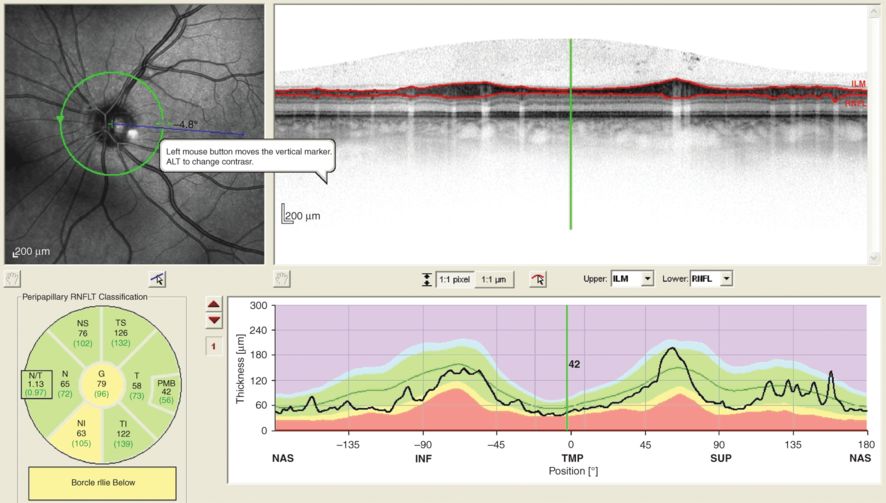 
This OCT scans appears to be unequally illuminated. What happened here is that a floater casts a shadow in the lower-left part of the IR image. The scan does not violate any of the OSCAR-IB criteria. This scan was QC accepted.

The last of the OSCAR-IB criteria, the beam placement criterion (B), may not be intuitively obvious to everyone. To put it simply, it is important to keep the OCT scan in the live window horizontally orientated whenever possible.

Problems with the B-criterion arise when a scan is tilted in one direction at baseline and to the opposite direction at follow-up, because measurement errors in the range of 9–40 μm can be introduced [2]. The reason for this is illustrated in Figure 18.8. Therefore, scans with suboptimal beam placement as described, should be rejected. 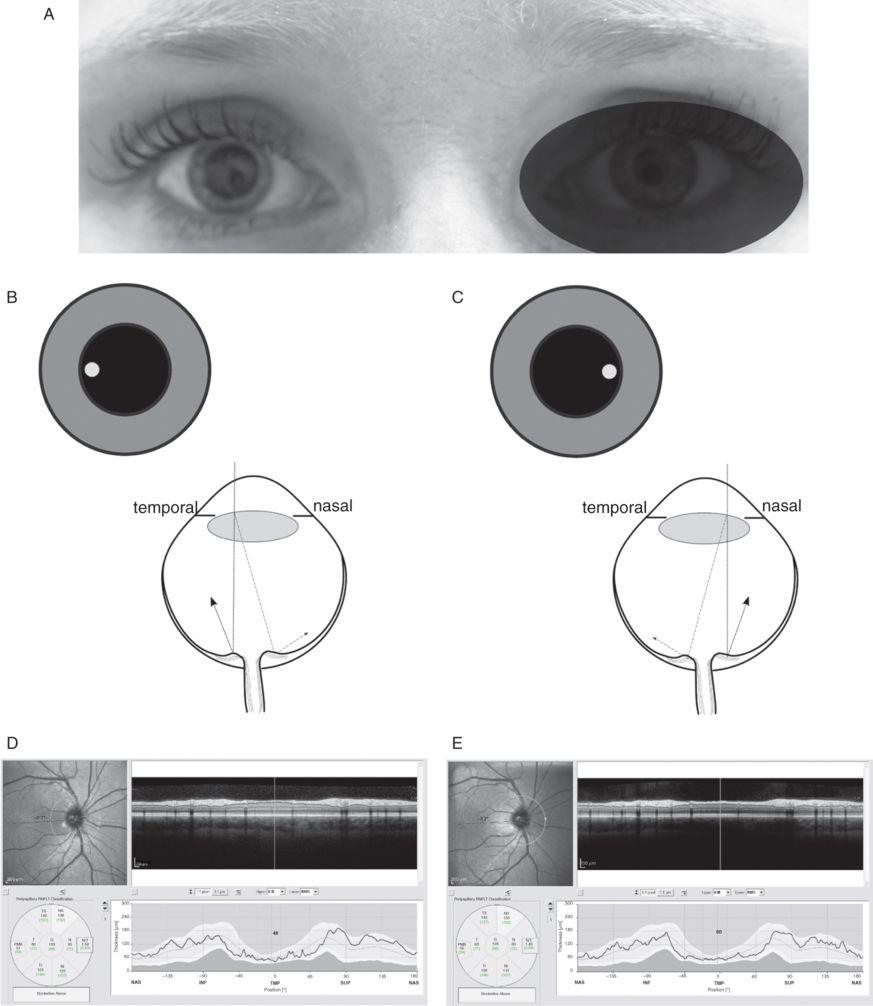