Optical coherence tomography pathologies to know about in clinical practice


OCT image of a patient with a simple epiretinal membrane (arrow).


OCT image of a patient with an epiretinal membrane (yellow arrow) with cystic gaps (red arrow) and vitreomacular traction.

Common predisposing factors for ERM include aging and diabetes. Even though ERM does not threaten vision loss, in severe cases it can cause a decrease in visual acuity and metamorphopsia (i.e., distorted vision). Surgical intervention is usually not warranted in ERM unless visual symptoms are impeding individuals’ daily activities.

Drusen typically occur in eyes due to accumulations of extracellular substances between Bruch’s membrane and the retinal pigment epithelium (RPE) [3]. It is suspected that drusen decrease oxygen and nutrients to the RPE and photoreceptor cells, which in turn leads to the pathologies discussed in the paragraph below.

Drusen most commonly occur with aging and, when severe, are associated with macular degeneration. Rarely, drusen are related to dominant familial drusen, which is a comparatively benign condition. In contrast, the presence of large, soft, and numerous drusen appear to increase an individual’s risk for progressing more rapidly to advanced age-related macular degeneration (AMD) and is an early clinical manifestation of AMD [3–5]. Age-related drusen are distinct from optic disc drusen, which result in calcific degeneration in some of the axons of the optic nerve. Both of these entities can be seen via ophthalmoscopy and visualized with OCT.

On OCT, retinal drusen are visualized as hyperreflective protuberances underneath the RPE layer (Figure 12.3). The retinal tissue can be displaced if the drusen are large enough. Optic disc drusen can displace the RNFL, which can be associated with a thickening of the disc tissue (Figure 12.4). 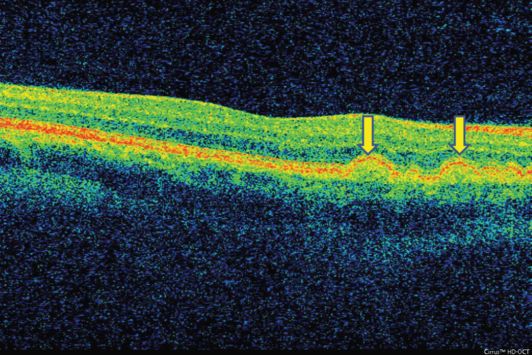 
OCT images of a patient with retinal drusen (arrow). 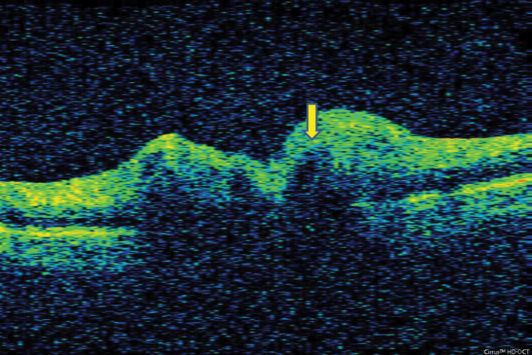 
OCT images of a patient with optic disc drusen (arrow).

Most patients with drusen are asymptomatic; however, it can mimic symptoms of papilledema and is associated with AMD [6, 7]. Optic disc drusen can ultimately lead to loss of visual field due to displacement of the nerve fiber layers. OCT is a useful tool to monitor the progression of drusen over time.

Central serous chorioretinopathy (CSR) develops when a leakage of fluid occurs in the subretinal space or in conjunction with a pigment epithelium detachment (PED). This fluid leakage is thought to develop due to dysfunction of the RPE and/or choroid. Fluid accumulation can involve the central macula which can ultimately lead to vision loss that mimics acute optic neuritis.

CSR is most commonly seen in young and middle-aged patients, with a higher proportion of men being affected. The majority of CSR cases are idiopathic in nature; however, there are several potential triggering factors. Specifically, previous studies have noted that stress, Cushing’s syndrome, corticosteroid therapy, and anti-anxiety medications are independent risk factors for developing CSR [8–10].

CSR is best detected by OCT and fluorescein angiography. On OCT, CSR is identified as subretinal clear fluid accumulation in the macular region, which leads to elevation of the retinal layers above (Figure 12.5). If the RPE is intact then there is a hyperreflective band at the base of the fluid cavity (Figure 12.5). However, if the RPE is detached then a hyperreflective band is seen over the fluid cavity (Figure 12.6).


OCT image of a patient with central serous chorioretinopathy.

The majority of patients with CSR will experience some form of visual disturbance. It can be acute in onset with a visual acuity as severe as 20/200 with accompanying central and paracentral relative scotomas. An urgent evaluation is needed to rule out retinal detachment, which requires a detailed ophthalmological evaluation, including OCT. However, upon resolution of the subretinal fluid collection, visual acuity can improve almost back to patients’ pre-CSR baseline, although some individuals will have permanent impaired night vision, color desaturation, metamorphosis, and poor contrast sensitivity [11] CSR can reoccur, resulting in progressive vision loss, and can be associated with subretinal neovascularization and pigment epitheliopathy.

CSR treatment should be considered if it has not spontaneously resolved in a few months and especially if an individual is still symptomatic. The therapy chosen depends on whether there is fluid leakage into the central macula. Laser photocoagulation is done if the CSR is distant from the central macula because of risk for causing permanent central vision loss with this treatment. In CSR cases involving or within close proximity of the central macula, transpupillary thermotherapy is preferred [12]. There are other treatments that demonstrate promise with minimal complications that are becoming more popular [13].

Pigment epithelium detachment (PED) occurs when there is disruption of the normal junction between the basement membrane of the RPE and Bruch’s membrane. Subretinal fluid accumulates from the choriocapillaries, resulting in PED. This fluid collection and the resultant separation of membranes can also occur in conjunction with a CSR and retinal detachment.

PEDs are most commonly seen in males between the ages of 20 and 60 years. There are several conditions that predispose individuals to developing PEDs, including AMD, choroidal tumors, high myopia, choroidal neovascular membranes (CNM), ocular histoplasmosis, and hereditary choroidal degeneration [14]. In some cases, PEDs are idiopathic in nature. However, in clinical practice PEDs are mostly seen in association with eyes that are treated for neovascular AMD [15].

PEDs can be seen ophthalmoscopically in the posterior fundus, although they are best visualized with fluorescein angiography and OCT. On OCT, PEDs appear as a dome-shaped elevation with a hyperreflective red band overlying the dome (Figure 12.7). The PED causes shadowing of the choroid below, which is not seen in CSR without accompanying PED.


OCT image of a patient with pigment epithelium detachment.

The majority of patients are < 55 years old with PED present with small detachments that are not associated with other chorio-retinal disease processes. In these cases, the prognosis is excellent and the patient requires no specific intervention, especially if the fovea is not involved. If the fovea is involved patients may report blurred vision, visual distortion, micropsia, or metamorphopsia [14]. In older patients with PED that does not have accompanying CNM, close monitoring is required because these membranes can develop, resulting in significant visual impairment, including loss of central vision and less than 20/200 visual acuity [16]. Older patients with PEDs that are associated with CNM have a poor visual prognosis; therefore, focal laser photocoagulation therapy is warranted in these patients. Serious retinal detachments will often occur concurrently with PEDs which requires treating the underlying precipitating disease process.

Macular edema occurs when deposits of protein and fluid accumulate within or under the macula. The macula is located near the center of the retina, where the cones are located, which become affected with macular edema.

Macular edema is well visualized on OCT. On OCT, macular edema results in thickening of the retina and loss of the normal foveal contour, which is best seen on the macular tomograms (Figure 12.8). Continued intraretinal fluid accumulation eventually leads to the visible cystic spaces in cystic macular edema. 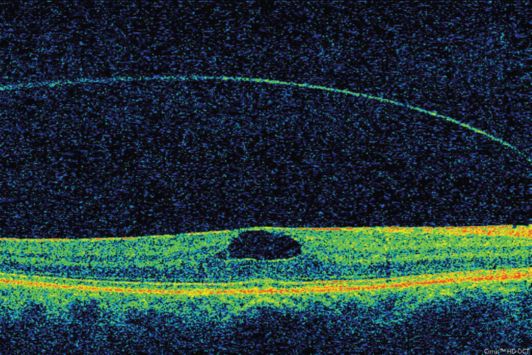 
OCT image of a patient with macular edema.

The treatment for macular edema varies depending on the cause and severity of the condition. The primary goal of treating macular edema in diabetic patients is to stabilize their vision with focal laser treatment. This treatment seals off the leaky blood vessels that are causing disruption in macular function. More recently, novel medications, including anti-VEGF, are being used to help slow the leakage and growth of abnormal blood vessels [17]. Cystoid macular edema may need nonsteroidal anti-inflammatory or steroid eye drops and, in more refractory cases, intraocular steroid injections, vitrectomy, or lens replacement.

Retinal detachment occurs when the neurosensory retina separates from the retinal pigment epithelium (RPE). This separation creates a potential space where subretinal fluid accumulates. There are several types of retinal detachment: rhegmatogenous, serous, and traction.

A rhegmatogenous retinal detachment occurs when a full thickness retinal break allows vitreous fluid to access the subretinal space. It will typically present with photopsias, floaters, a curtain across the visual field, or decreased visual acuity, or it could rarely be asymptomatic. OCT will show a hyporeflective dark space under the neurosensory retina (Figure 12.9). A rhegmatogenous retinal detachment is treated with urgent surgery (within 24 hours if central vision is threatened), so if there is a suspicion of this, urgent referral to a retina specialist is recommended. 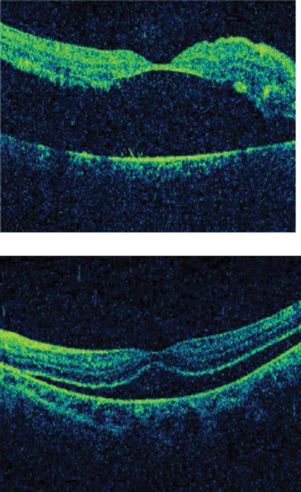 
OCT images of the macula in two patients with rhegmatogenous retinal detachments. Vitreous fluid is present in the subretinal space [30].

A serous retinal detachment is caused by subretinal transudation of fluid without a retinal break. Fluid can be from an inflammatory condition, vascular lesion, tumor, or degenerative process. Predisposing conditions include Vogt–Koyanagi–Harada syndrome, Harada’s disease, idiopathic uveal effusion syndrome, choroidal tumors, central serous retinopathy, posterior scleritis, hypertensive retinopathy, Coats’ disease, optic nerve pit, retinal coloboma, and toxemia of pregnancy [18]. A serous retinal detachment can be asymptomatic until it involves the macula. Symptoms include photopsias, floaters, a curtain across the visual field, or decreased vision. OCT will show a fluid collection between the neurosensory retina and the RPE without a break in the retina (Figure 12.10). This may manifest as an area of elevated macular thickness when the macula is involved. Treatment is focused on the underlying cause, and surgery is usually not needed. 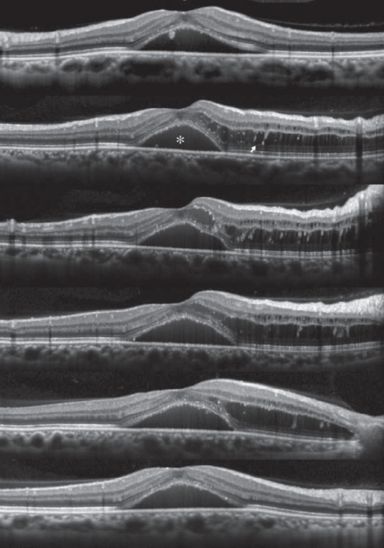 
OCT image of a patient with serous retinal detachment